The Rafael Nadal watch is mostly an expensive sports edition. So take a look at some of the designer watches he flaunts. You can look even if you cant buy.

Rafael Nadal is known to be one of the biggest names in tennis, he has a ranking of #2 by the ATP board. The Spanish pro-star has even made his name as the king of clay for the main reason that he performs like a beast when competing on clay grounds.

The Pro-tennis player has always been one of the most if not the most talked-about tennis players in the world if it is not pertaining to the victories of his match its about the type of watches that he usually steps of showcasing. Rafael Nadal loves to show off his designer watches like his Richard Mille RM27-03, the pro-tennis star and the Richard Mille branding has been partnered with from around 2008.

An RM27-03 watch is not something that you are going to see on a daily bases no matter if the person is high-class, for one its a limited edition luxury watch and secondly the watch cost more than most rapper house. Just imagine you wearing a luxury watch that costs the same as a luxury house well furnished out as well.

Why Are Tennis Stars Chosen As Brand Ambassadors?

You must have noticed that a number of tennis stars are involved in endorsing certain products and also collect hefty sums for the same. The simple reason for this is due to the fact that most tennis stars have a huge fan following. The popularity of the sport makes the players famous and they become known faces with a global audience that wants to mimic their every action.

This puts them in the sweet spot for marketing. Large companies vie against each other for A-listed players and are ready to dole out huge amounts of cash to sign endorsements with these tennis stars.

What Makes Rafael Nadal A Good Choice As A Brand Ambassador?

Though Nadal has been in the limelight for a while now, he continues to be the sweetheart of tennis enthusiasts the World over. What he wears is soon swiped off the shelves of stores. This means that he has a large part of the World population watching his every move. This makes him an excellent model for companies who want a pedestal for their products.

There is no need for an introduction when it comes to the performance of this player on the courts. He has dominated the game hard and has topped the charts more than a few times. Millions of his fans are obsessed with his every move on the court, while the other half of them continue to idolize him.

No one wants a brand ambassador with a pride-filled head. Though Nadal is a living legend of the game of tennis, he continues to be a humble human being who appeals to millions. This makes him an easy person to deal with and a lot less headache for companies. 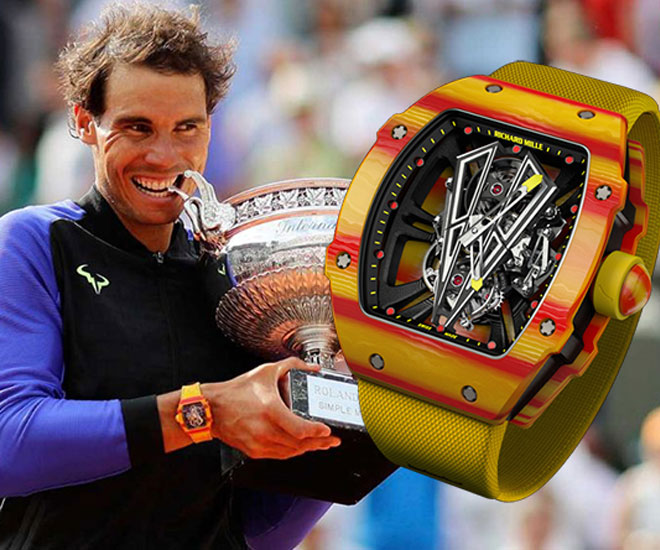 When it comes to availability for this watch its very low, Richard Mille had only created 50 of this model type. This high-end luxurious watch costs over $700,000 USD, the mechanism of this watch is the next-generation level type of materials.

The color design of the watch was based on the Spanish flag that represented where Rafael Nadal is from, a bold red and yellow color design. Is like the two had merged to create the luxury watch, the watch can withstand shocks up to 10000 G’s and also works on the tourbillon mechanism system.

what most people would normally wonder is does the watch affect his game and how does he play with the watch on his hand without throwing off his game. This is something that I am sure was thought about when the watch was I the building process that’s why am sure the made the watch weighted 31 grams and this is extremely light on the hand.

So for the majority who wonders if the watch affects the tennis star playing ability on the court it really does not affect his game one bit am sure he doesn’t even remember it’s on his hand at the time when playing on the court.

It was stated that back in the year 2008 Richard Milli has reached out and contacted the tennis player Rafael Nadal. At that time Richard Mille had wanted to create a watch so light you wouldn’t even remember that it was on the wrist of your hand however with the finest Richard Mille craftsmanship and tool added.

It was said the Richard Mille has got to the tennis star and had visited him at his home where they then became good friends and partnered up. It wasn’t sure at the time if the pro-tennis player would wear the watch in his games due to the main fact that he was wondering if the watch on his hand would affect his shots.

However, the two have sat and merged their ideas, at least Richard Mille knew from the get got what and how he was going to craft the watch. After the watch had been done and Rafael Nadal was seeing it for the very first time it was like love at first sight.

The color was based on the Spanish flag that Rafael Nadal would normally use to represent his country so it was a win from there. After passing that faze he then tried the watch on and again it seemed like there was nothing on the tennis player’s hand and everything used in the build thing of the watch is of high-valued.

It is stated that from that day on the two became great friends and has been partnering for a numerous amount of years now it is even said they have a lifetime partnership deal.

This may be shocking to some of you guys but Rafael Nadal lost his watch twice, he lost it one the same year 2008 and then 2012. After the first lost the fans and media personals were saving that he was going to lose his partnership deal with the luxury watch brand Richard Mille however he did not, in fact, the two got even closer in bond and partnership, he even became a brand sponsor for Richard Mille.

Can I Buy Rafael Nadal Watch?

The Richard Mille RM27-03 luxury watch can’t be bought in the same way you would buy the rest of his tennis equipment like for example, Amazon, eBay, Tennis Wearhouse, or none of those marketplaces. The watch is said to be the second most expensive watch in the world with the availability of just 50 pieces made.

Am sure it probably sold out however to get this watch you have to visit the official Richard Mille website, we would recommend not buying from any other platforms the costs over $700,000 USD so if you see the same one on a few other sites for let us say $150,000 it is not the real Richard Mille RM27-03 luxury watch its a fake and we recommend not and sticking to the official store or website only for these high purchases.

The reason why we emphasize this is due to that I personally have been browning the interned and see unauthorized webpages selling these things and fo at a super cheap cost as well. They will look real but they are a fake and it’s good to just shop from the original store to not get tricked into buying just because you may think that you are getting a super deal. When you think of how so many high-tech and high-valued things to be in one single watch and still being very light on the hand it’s really amazing and well put together. The engineering of the watch goes way beyond normal craftsmanship it’s no wonders the price so sky hight, it is not normal for one to compact so much in just one little watch.

If you are to really sit and think about the engineered things used to build the watch it would wow you to say that it’s pure genius. For a brand that’s just started out in the year 2001, they have reached a far way interns of holing the spot as number second most expensive watches in the world.

The last watch Rafael Nadal has been spotted sporting is the Richard Mille RM27-03 luxury brand watch. Rafael Nadal is no stranger when it comes to flashing expensive watches on the tennis court or off the tennis court, he the previous model before the RM27-03 which would be the 02 and 01.

Those two were currently lost, one was found back and the other was missing forever, all that said thanks for reading to the end in our article we do hope you have learned a few things here that you did not know before reading.

Last but not least do remember to go visit some of the other articles that we have on hee like, Novak Djokovic watch and a few other interesting stories.