Though its cute and smart, why are tennis players wearing the same outfit always? Get an answer to this question and many more such queries,on our site.

Whether you’re a real tennis supporter that watches all the major tournaments or simply just someone that turn on the television during the matches, I’m sure you have at least asked yourself once why so many tennis players wearing the same outfits. Is there a reason why they must wear the same outfits or do pro player just think it would be a great idea to wear the same kind of outfits? Well, we will be going through everything you need to know about tennis players and their outfits choice.

Why Are Tennis Players Wearing The Same Outfit?

Watching on TV it may just look like all players are randomly choosing the same outfit to wear before they take part in the game, but that is definitely far from the truth. Well, by looking at each players it is safe to say that they are wearing the same outfits, but that doesn’t happen by accident or because they have the same taste in clothes. Most professional players do have sponsors that provide them with the opportunity to earn a huge load of cash and what the brands need back in return is for the players to wear their clothes with the logo while playing a match.

Sponsors with a lot of money usually aim more towards the top tennis players because they actually get the most exposure when playing and in order to get these players on your team, you’d have to have the right amount of money to do so. Therefore, there is only a handful amount of brands that have the ability to endorse these top ranked tennis players.

So, when there is only a few brands out there with a huge amount of money to spend on these top tennis players, many players will be working with the same brands. As you can see the players that are sponsored by the same brands, will have if not the same outfit, something that looks very similar. 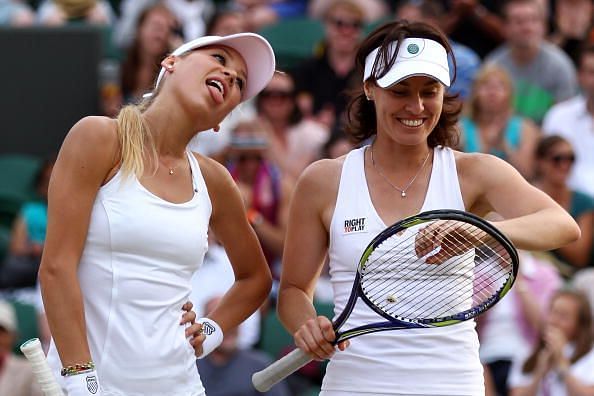 So without further ado, let’s take a look at what clothing brand the top 10 ranked ATP tennis players are wearing at the moment. Base on the list below, you’ll notice that many players are actually sponsored by the same brands.

As you can most players are sponsored by the same sponsors and because of this you will see those 3 players that are sponsored by Adidas (Stefanos Stefanos Tsitsipas, Alexander Zverev and Dominic Thiem) wearing very similar outfits during their match. You’ll also experience the same with Lacoste players (Novak Djokovic, Daniil Medvedev and Roberto Bautista-Agut) and the Nike players (Karen Khachanov and Rafael Nadal). The least but not last, you will even realize that Roger Federer and Kei Nishikori is sponsored by a top Japanese company that goes by the name Uniqlo.

There Are Some Exceptions to This

Although we’ve mentioned above that most players wear the same outfits when playing their match is due to the fact that they are being sponsored by the same sponsors, there are a few exceptions to this. The main exception is in the world most popular tennis tournament, Wimbledon.

In Wimbledon, all tennis players even the ones that are being sponsored are obligated to wear the same outfits which is known to be an all white one. The main reason for this is because the tournament has a history of having a strict dress code that all players need to accept and follow before taking part in the event. It is said that even the players underwear has to be white and if the players doesn’t comply with the rules, they will eventually be disqualified from the tournament.

There are still a advantage since the players still have the opportunity to wear their sponsors outfits, once they are white they should be in the clear, because it will still look like all players are wearing white clothing at the Wimbledon. Which they are just strict on the color, not the overall clothing.

Though this may not be one of the biggest problems in the world right now, it’s quite annoying having to see almost all tennis players wearing the same exact outfits during their gameplay. It’s pretty much safe to say that brands like Adidas, Nike, Lacoste and Uniqlo are billion dollar companies, but they haven’t take the opportunity to create a few unique outfits for their sponsored players? It’s such an easy thing to do, but I strongly believe that the brands just want to advertise a few specific outfits and it seems to be working out quite well.

I can pretty much understand the different brands on the market, but I think it would be a good idea to create a few unique outfits for all the players to wear. It doesn’t have to super unique, all you have to do is change the colors and the problem is fixed.

Not only will the brands benefit from doing this, but the sport in general would also benefit in a positive way. When someone that haven’t watched the sport before start to watch each tennis match and realize that all players actually wears the same outfit, it will be challenging for them to know which player is who. But if all players had a unique color design, it would be much easier for beginners to follow the sport and actually gravitate to it in a positive way.

For example, let’s think about soccer, can you imagine if all player was actually wearing the same outfits in a match, it would be impossible for newbies to tell the the team apart especially the players. It may not be much of a deal in tennis since there are only two players, but it is still quite annoying to always see the same outfit all match.