Noticed that tennis players bounce the ball before serving? Now know the reason behind that action. There are many more basics we can teach you on our site.

Have you ever seen a tennis match being played and the player goes on the court and just serve the ball without bouncing it? The answer is no I have not seen that in my many years of playing and watching the sport of tennis. That being said it leaves the obvious question of why do tennis players bounce the ball before serving the ball?

Bouncing the ball before serving in the game of tennis is more of a ritual to the game most would say. Bouncing the tennis ball gets the player in playing motion, it preps the mind as well while adjusting the feel and bounce of the ball. It’s common to see a player bounces the ball 3 to 10 times before serving in the game if a player goes above 11 and more bounces it could be he/she is just taking up time.

Why Do Tennis Player Bounces The Ball Before A Serve? As mentioned above the bouncing of the ball is kind of a ritual to the sport, it preps the player’s mindset to the game while giving them a feel of the bounce of the ball. Its also known that players bounce the ball to possession their body with the stance in which they need to serve the ball.

The bouncing of the ball will put the player in a steady mindset fully focused on what’s ahead of them, it calms the mind while getting the body ready. We do have players that don’t really know the true meaning behind it and just bounce the ball and serv because that what they would see.

However, all the professional player of the sport tennis knows this for a fact that it helps and plays a vital part of serving. To a plain outsider, you won’t see the importance of bouncing the ball and how important it is to the player of getting them ready.

Do All tennis Balls Bounces The Same?

That’s another reason why it is good to bounce the balls to get the true feeling of the ball before serving in the game. Its support clear that the bouncing of the ball is an important aspect of the game whether you believe it or not, that’s why its like a ritual to the game.

What Makes The Tennis Ball Bounce? 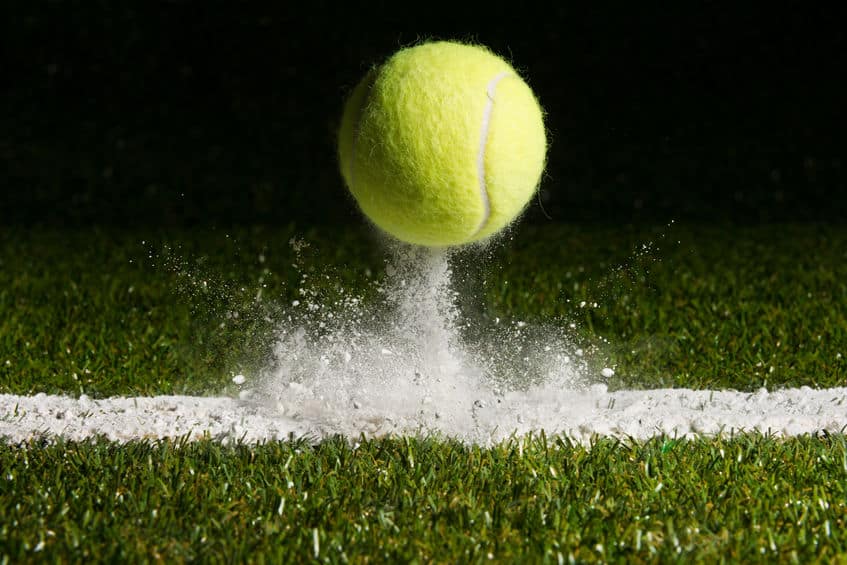 I bet you didn’t know it was that simple however there’s a lot of science behind that so we try explaining in the best and simpler ways possible.

Does Tennis ball lose There Bounce?

Each time a match is been played the event would make sure to always use new tennis balls if a tennis ball loses its bounce it can default the game in so many ways for both players competing. A tennis ball will lose its bounce over aa period of time the compressed air inside the ball can leak through its porous, this is the rubber material used to trap the air.

Anything that relates to the ball loosing the comprised air will result in the ball losing its bounce.

Not that he needs the extra bit of luck, but Novak Djokovic is another tennis enthusiast who refuses to get rid of his old ways.

He is known to bounce the ball repeatedly a couple of times before he enters into an important service. This is a practice that he has been following for a number of matches.

His pet poodle Pierre is another one of his superstitions. His favorite pet has accompanied him to almost every match, and Djokovic considers him to be a good luck charm.

Victoria Azarenka is another name synonymous with pre-match rituals. Not only does she bounce the ball a number of times before actually making the final move, but she also enters every court with a hoodie and loud music blasting in her ears. Regardless of the oddity of the ritual, she seems to be doing spectacularly well at the game.

Serena Willams has been in the field for a long enough time to have all her habits noticed. The bouncing ball ritual is a habit with her too. She has another habit that is particularly gross and might lead to some people not wanting to meet her immediately after a match. She insists on wearing the same socks for the entire tournament, that too without putting them through a single wash.

Though there must be even more players with even weirder habits, it should be kept in mind that skill is the most important. There is nothing that can replace pure skill and unique technique.

While bouncing the ball this pro player likes to set his hair and is popularly known to pull his underwear, this pro player is Rafael “Rafa” Nadal Parer. He also has a large bounce routine with the amount of time he bounces the ball before serving. Another player that is said to have the bouncing record of over 20 bounces in a tournament before serving the game is  Novak Djokovic, this was done in the Miami openings in 2012.

A next common thing that players do while bouncing the ball before serving on the court is bounce and moving around at the same time, it could be bouncing and moving their body at rhythm or side to side. A popular player that does this would be Alexander “Sascha” Zverev, this german professional player likes to move his upper body back and forth as well while bouncing.

You will see a majority of players bouncing the ball with their tennis racquet doing that is a common this not like the other few listed above that not s common. Some will even do a quick stretch workout while bouncing the ball, crick fingers, and neck releasing their body before the serves. Am sure you guys can relate to seeing most of there while watching a full tournament or any tennis event.

Thanks for reading to the end in why do tennis players bounce the ball before serving, we do hope you have enjoyed reading our article. We hope you have learned a few things you may not have known about tennis balls and the other benefits of them as to how the even bounce as well.

Again, thanks, and please remember to check out a few of our other related interesting articles like for example, why do tennis players eat bananas, come see the shocking truth alongside with more intense topics.