Crushing hard on Pete Sampras? We have the ultimate Sampras balm for you. Take a look at the way he spends his free time and much more. Visit us to know.

Pete Sampras is sure to make the all American history books of the greatest and best tennis player of all time.  The professional tennis player is now retired but his name shall forever rain with having 14 grand slam singles titles to his name. Roy Emerson’s had the record of 12 wons grand slam single titles for years but it was broken by latter down the like by Pete Sampras.

Petros “Pete” Sampras was born on August 12, 1971, in Washington, D.C. in the USA. His introduction to the game of tennis began at the very young age of 3 when he discovered a tennis racket in the basement of his home, he then spent hours hitting balls against the wall. Looking at the early interest that Pete showed towards this great sport, his father Sotrerios and mother Georgia made the decision to move the family to California as the weather would permit Pete to play tennis almost all year round.

when it comes to his playing style, Sampras was an all-court player who would often both serve and volley thus possessing an all-around skill in the early years of his career. Sampras was able to hit winners from both his forehand and backhand from all over the court. He was able to catch attacks wide to his forehand using his speed and hitting a forehand shot on the run. When successfully executed, he won many points outright or put opponents immediately on the defensive, due to the considerable pace and flat nature of the shot.

Pete Sampras had won in his overall career a sum of 64 singles titles and was ranked number 1 from the year 1993-1998. In that era his was named the greatest tennis player through those years, his on-court skills were just amazing to watch. 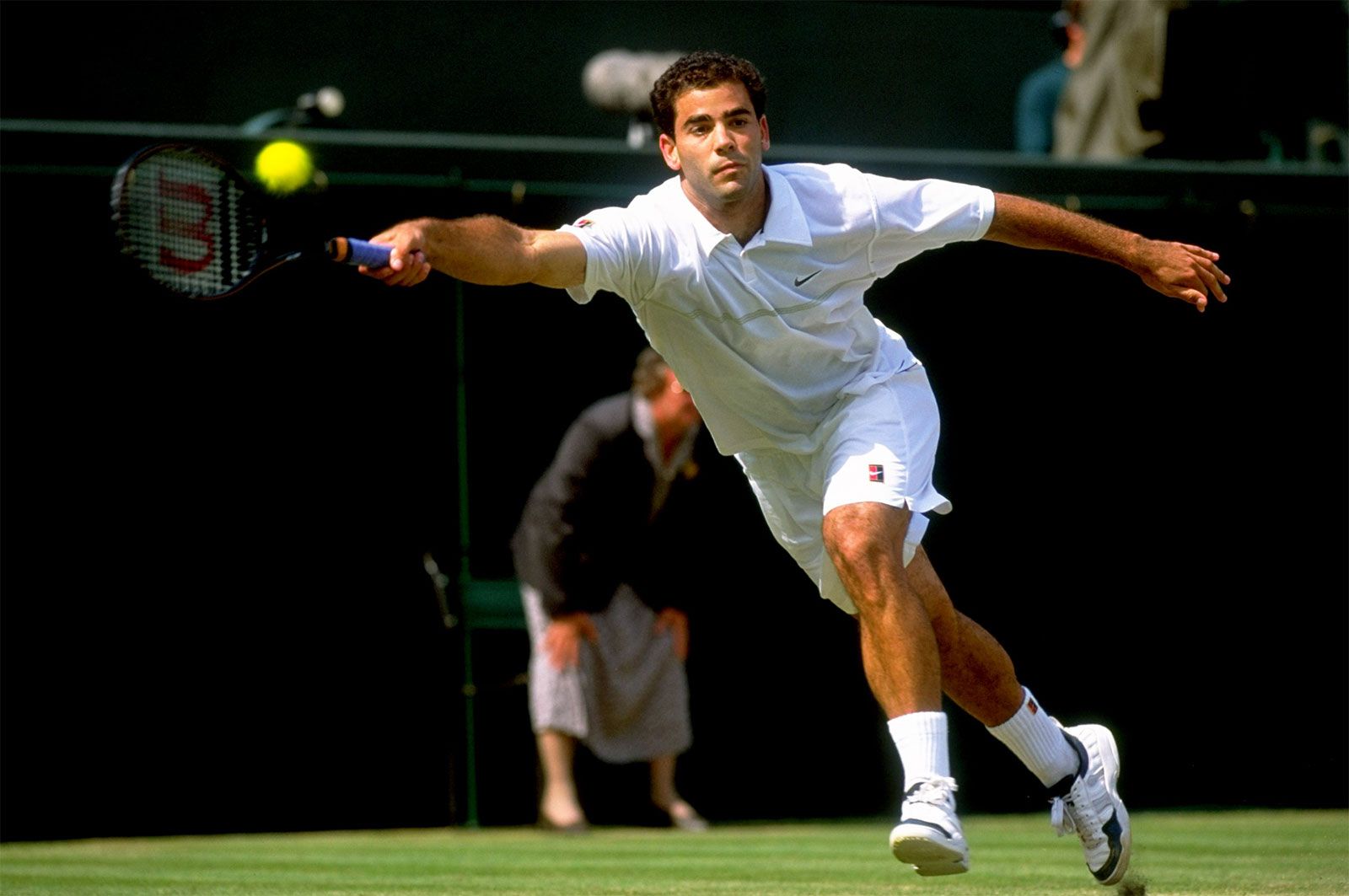 With so much successful wins and major grand slam event won by the all American tennis player the question that most would as is what is Pete Sampras net worth? Pete Sampras is estimated to carry a net worth of $150 million and we are only calculating the prize money won by the retired pro-tennis player.

The former professional tennis player is not of those tennis players you can go easy with on the court, no matter your ranking or who you are it is sure to be an entertaining match. The people of the era called him “Pistol Pete” due to his precise and powerful serves in the game through the full game, is like he doesn’t lose his stamina.

Let us get back his net worth and the prize money that we won in all the years of his career. Pete Sampras turned pro at a very young age of 16 that was in 1988 the year he had turned pro, he also had ranked #97  best tennis player in the world at that age. When I say Sampras will be noted down in the history books of tennis you now see what exactly what am talking about.

From the year he became pro-1988 to the year 1994 he had accumulated a sum of $10.74 million from prize money won. In 1989 was the year that the work had fully recognized the professional tennis player, he had won his first singles title in the Australians Opening grand slam event.

The following year after Pete Sampras had won his first major title at the U.S Openings, in 1991 he started capturing some championship titles at the tennis master cup. Bt the year 1993 he was ranked number 1 after defeating the former #1 player Jim Courier and in 1994 he won his first two titles at the Australians when defeated Tod martin in the finals.

From 1995- 2002 he generated from prize money a sun of $22.5 million just in that year’s time period. Within that time period, Pete Sampras had won a number of grand slam events. He did lose his #1 ranking in 1999 however he won it back the year after.

Pete Sampras’s tennis career journey is something that most if not all the major league’s tennis players of the era and our era will forever remember. You can always expect great from hin and the unexpected in his matches on the tennis court.

This may be surprising to some you but Pete Sampras made double when he made for gis prize money in enforcement deals, lets see how that goes down below. Studies show that the all American former pro-tennis player had made over $100 million in sponsorship deals and endorsements. Let us start with his tennis racquet deal, he used the Wilson Pro Staff Original for a good while, and the way how he was performing great on the tennis court the racquet sale went up expediently high making millions for the company and him getting a bigger slice of the cake.

He didn’t just stop there the Babolat wanted to work with his as well so he switched brands and went over to the Babolat tennis racquet brand where he used a numerous amount of model racquets. The Babolat sales had then scaled high as well due to the reason of people asking if it because the Babolat racquet is better why he had switched.

The next major league company that had signed the tennis player was Nike, he was also with the company for a very long time enforcing their tennis show and other clothing brands that the contract had included. Pete Sampras had some major labels to his name earing a lot of money, it was even said that he was one of the highest-paid tennis players on the contract of the companies.

Sampras did not cap there like most tennis players when they get a contract with the major brand companies he was also with Dannon and Pizza Hut. In Sampras era, he was like the Godfather everyone wanted to do business with him, his great performances were just about on all TV screens all over the world.

Pete Sampras didn’t just wait get signed by major companies to make make money nor wait on cash prize money he also did real estate as a side hustle for himself.

With building a solid net worth of $150 million the former pro-tennis star can just sit back and relax, most tennis players after they retire would normally still be in the tennis field even as a tennis coach. Pete Sampras is enjoying his retirement being married to the lovely actress, model, and singer Bridgette Wilson it was little before he retired he got married in the year 2000.

After the Marriage the couple had two children, one had born in 2002 and the other three years apart 2005. This is just to show you that he is still winning even after retirement. His all-time career was legendary lets is take a fast look back at his achievements.

All these will be written down in the tennis history books for the former pro tennis player, he had a magnificent run in his time. Thanks for reading to the end and do remember to check some of the other related articles that we on like for example, Andrew Riddick’s net worth and more.

Now that you have reached the end of this huge article, I am sure you know all there is to know about this tennis legend Pete Sampras. Though sadly he had to cut his professional tennis career short as he was diagnosed with thalassemia minor, he is still regarded as one of the greatest tennis players in the history of the sport due to his various achievements.in fact, even today Sampras is considered to be one of the best serve-and-volley players in all tennis history due to his mastery of the serve and volley play style. He has several big endorsements and enjoys his retired life with his wife and children.