John McEnroe Net Worth can give you the inspiration you need to work harder. It is sweat and hardwork that leads to sucess in life. Look to be inspired.

John Patrick McEnroe Jr was born on 16 Feb 1959 in Wiesbaden Germany but soon after that, while he was still quite young, the entire family moved to Douglaston. It was here in Douglaston that he actually got interested in tennis and began to pursue it. At the age of 8, he started playing tennis at the Douglaston Club. Seeing his impressive tennis skills, his parents enrolled him at the eastern lawn tennis association. To improve his skills further he moved to long island and joined the port Washington tennis academy.

McEnroe became the top-ranked singles player in the world on March 3, 1980. He was the top-ranked player on 14 separate occasions between 1980 and 1985 and finished the year ranked No. 1 four straight years from 1981 through 1984. He spent a total of 170 weeks at the top of the rankings which is no small feat for sure. He was well known for his shot-making and volleying skills but on the other hand, he was also known for his confrontational on-court behaviour that frequently landed him in trouble with umpires and tennis authorities.

Though he had been retired for over 25 years now, John McEnroe is well known to be one of the most talented tennis players in the history of the sport. The main reason behind is popularity was because of his outstanding performance and polarizing attitude, but he still remained in the sport as one of the top commentators. He was a really successful tennis player when it comes to earnings, has he was known to be one of the most marketable player the game has ever witness throughout the years.

What is John McEnroe net worth? McEnroe is without a doubt one of the greatest former tennis player the world has ever seen. He has an estimated net worth of $100 million and this is mainly due to his multiple source of income such as prize money, endorsement deals, commentating, coaching, exhibition appearance fees and more. As you can see, even to this day McEnroe has never really left the sport and still managed to make a lot of money to this day. McEnroe has done quite well during his career on the court with 77 career titles, including seven Grand Slam championships. It is safe to say that he actually make his way to all semifinal at least in every major, giving him the opportunity to win three Wimbledons and four US Opens. In early 1980s, he was considered to be the number one player in the world for the first time, and he actually grow his popularity on the court during that time.

When John McEnroe was breaking records back then there wasn’t really much information about how much each player earned throughout the year in terms of tournament prize money. But, these are the information I was able to find.

When we calculate his final prize money after retirement it was just over $12.5 million. Though that amount may not sound huge right now, but it was considered to be one of the highest in the game back then.

Not only did McEnroe achieve a lot of success in Grand Slam tournaments, but he also took part in many smaller tournaments as well. One thing that made him consistent on the court is the fact that he didn’t have to deal with many injuries which also caused him to earn more.

Even though money wasn’t on the high end for doubles players, he still managed to become a successful doubles player. A fun fact about John McEnroe is that he actually won more Grand Slam doubles titles than singles, providing him with the opportunity to win Wimbledon five times, and the US Open four times.

As mentioned earlier, McEnroe was a very talented player on the court, but he was known by a lot of people as the guy with the bad temper and amazing personality. There was actually a time when his character gained more attention than his actual playing style on the court. This made is one of the most marketable player and he still remains the most marketable retired tennis player to this day. Most of his gameplay on the court, he uses the Dunlop tennis racquet to dominate the game. He continued using a wood racquet for a very long time, but over a period of time he then switches over to modern options. Dunlop was a huge fan of McEnroe and they stick with him most of his career, even though he would constantly damage them in anger.

His recent games he has been playing with the Head racquet. McEnroe is a player that enjoys playing a lot of exhibition tennis, he’s definitely trying to stick with some of the same style that helped him win. If you have ever take part in the sport, then you might notice that it is very hard to serve and volley in today’s game, but the racquet he plays with provide him with the ability to add some added pop to his serve.

McEnroe wasn’t the type of player to have many different clothing sponsors. With that said, most of his matches came in Sergio Tacchini clothing. This clothing brand was the first to provide him with his iconic headband and most of his looks was red, white and blue.

After a period of time, he then switches to Nike has his main clothing sponsors. The company even take the time out to released a few lines of clothing specifically for him, which is unusual for someone who is retired at the time. His clothing line sold pretty well, showing how popular he still is after being retired from the soirt.

There are a wide range of companies out there that wanted to play a role in John McEnroe career while he was playing. As stated above, he became extremely marketable at the peak of his career, which helps him to sell a lot of different products for multiple companies. Back then in 1980, he was even in a Bic razor commercial as one example.

Even after being retired from the game, his marketability has skyrocketed. There are many different companies that like to play off of his volatile personality and he has a particular catchphrase “you can not be serious.”

He have work for many different companies during the past few years including Tesco, Mercedes, American Express, Heineken and Seat Altea. The good news is that he still remains a competitor during the majors, so people will always reconsider him.

One thing for sure is that McEnroe is paid a high amount for his work as a television announcer. He is currently working for ESPN and NBC. Though he may face a few controversy at times, most people still think he does an amazing job overall.

He still take the opportunity to play on the ATP Championships Tour, as well as other exhibition matches. When he’s making an appearance he usually charge a high fee compared to other former players, as he still remains as the crowd favorite.

He has a large amount of money to actually explore in a few business opportunities, but we don’t know how much success he had going that route. 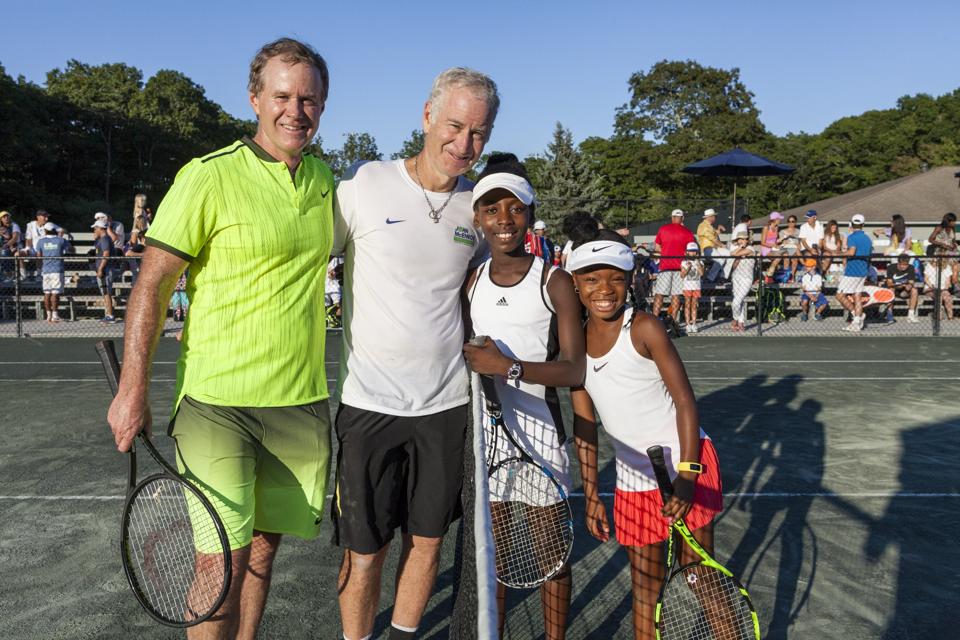 The good news is that McEnroe still has the opportunity to be a commentator for many years to come. He is 61 years old at the time of writing this, and is still capable of doing Grand Slam events for over a decade longer.

What he did well was manage his money the right way after retirement, which makes his net worth to rise continuously. As long as he remains in the sport, he will always be remembered as one of the greatest player to enter the game.

So as you can see, John McEnroe sure leads quite a busy, successful and extravagant lifestyle and with the massive talent that he has, it is absolutely no wonder he reached such dizzying heights in his tennis career, although he did have a few setbacks and controversies also. Even though he retired in early 1999, he still does occasionally play in senior events and even has a commentator job to fall back on even now, no wonder he is still fondly remembered and cherished by all. I hope this article also made you discover all the modes of remuneration that John  McEnroe enjoyed both during his tennis career as well as after his retirement.