Grigor Dimitrov has a life to envy. Check it all out on our site. Let his achievements inspire you to pave your own way in the world of tennis. Be great.

Grigor Dimitrov was born on 16 May 1991 in Haskovo in Bulgaria. his father Dimitar was a tennis coach and his mother Maria was a sports teacher. He first held a tennis racket as early as the age of three, and when he was five he began to play daily. His parents played a tremendous role in encouraging him into tennis from an early age as they were both sportspersons and wanted him to excel.

In his early years, his father served as his coach, but as his skill and talent became more apparent, he began to receive training from Emilio Sánchez and Pato Álvarez. then, in 2009 Dimitrov joined Patrick Mouratoglou’s Tennis Academy in Paris and spent the next four seasons there.

Early in his career, he was given the nickname “Baby Fed” for his stylish play and on-court talent that was similar to that of Roger Federer. Over the years, however, he has attempted to shed this title and has had people appreciate his own style. Dimitrov has won one of his eight meetings with Federer, at the US Open 2019.

The one aspect of Dimitrov’s game that has been widely praised is his variety and flexibility. He is comfortable playing on all areas of the court, having solid groundstrokes and exceptional touch at the net. He also employs aggressive drop shots to catch opponents off guard and is even known to frequently use fakes, especially on the forehand side, to fake drop shots instead of fast groundstrokes, wrongfooting opponents. His speed and athleticism are also exceptional.

He also occasionally dives to reach balls. Dimitrov is also noted as one of the only players on the tour who can consistently produce trick shots, His all-around play has had many commentators and past players call him “classy” and “stylish”. 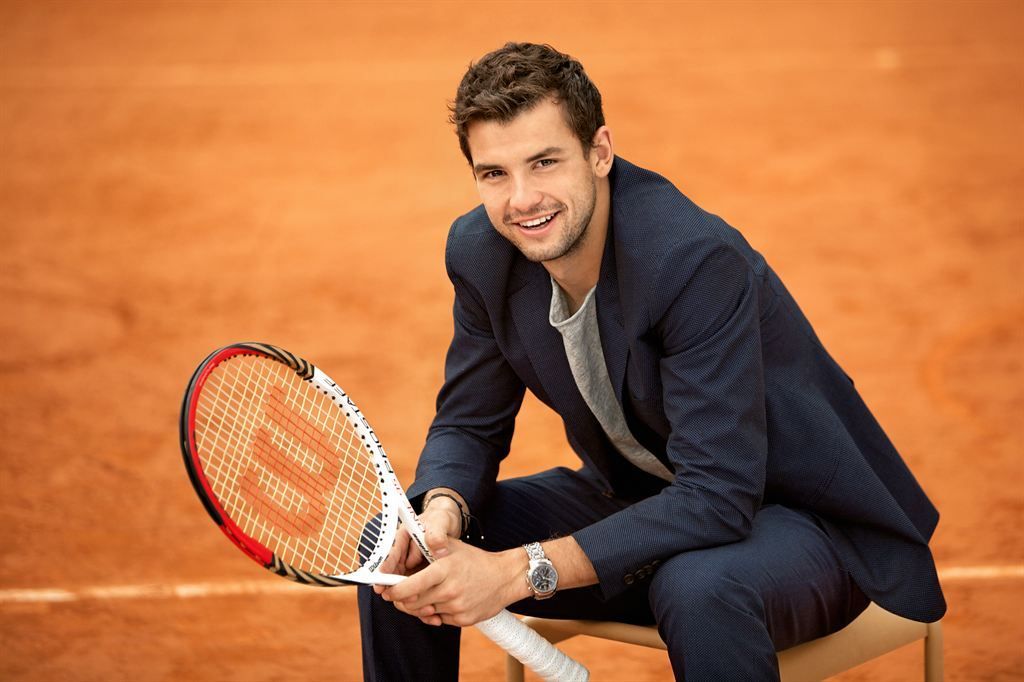 The tax amount reduced can be anywhere in the region of 15%-45%, it’s a common thing for tennis players to be taxed twice as well. With all that said I am just stating the fact that the tennis player cannot with what he has not really made after-tax.

Grigor Dimitrov is been sponsored by Nike, Rolex, and the Wilson tennis bran and for those sponsors, we aren’t fully aware of the exact amount the tennis player is been paid to endorse their products. All that said we can safely say that Grigor Dimitrov overall estimated net worth value is 12 million as we know it for the year 2020. Even though the professional tennis player has not won any grand slam event titles he still has made a lot of cash from his on-court game scene he turned pro in 2008. His closed success into winning the grand slam events was when he had qualified three times for the semifinals where he had then fallen out to a loose.

Let us take a quick look into how much the professional tennis player had made in prize money after he turned pro in 2008.

Earnings On the Tennis Court

All the above cash payouts are without before the money is been taxed. As you see on the listing as the years go by he made and drastic improvements in his income stream.his best years I would say that is in the year 2017 where he also was at an ATP ranking of #3 on the tennis bored.

The professional tennis player has interacted with a few other popular companies where sponsors or endorsement is been involved.  The most common one you would know of is the tennis racquet brand that Grigor Dimitrov uses on the tennis court.

Nike is the next huge sponsored brand company for the professional tennis player, as stated above we are no full sure on all the benefits that he gets for being a brand labeled icon for them. What we do know for sure is the professional pro-tennis player gets to rack some of the latest and newest that the brand has to offer.

Like for example, check the tennis racquet the Wilson staff 97s, it would be depending on how much is been soled at the time or within the year that you are promoting the racquet. However, that’s just my thought on the situation, there is a lot of false news on the internet about how much the companies pay them however those are not the truth, no one really knows the amount.

The only way we would know for sure is if we were to speak with a member of the company that has a good position or the tennis stars themself and am sure that would probably be breaching some contract rules. Now that that’s out the way we can move to his next and what most thinks is his hugest partner.

Rolex luxury watch company, Grigor Dimitrov have been enforcing the Rolex watches for a good period of time now, the tennis star has been in multiple advertisements for the company as well. Who wouldn’t want to endorse the Rolex watch brand there has to be loads of benefits especially when in the stoplight for the best tennis player alive.

Again it’s unsure of how much Grigor Dimitrov gets when it comes to paying, some say he gets half a million per year for his endorsement and others say he gets one million but the truth is no one knows.

Professional tennis player Grigor Dimitrov who has a steady net worth of $12,000,000 when calculated all his earnings and the amount of cash the tennis star had won in all his event played. It is not sure whether Grigor Dimitrov will take on any other companies to endorse their products at this moment. It is safe to say he is a very smart person and he knows for a fact that he would profit more from having a lot more to his endorsement list however the pro tennis player doesn’t want to become crowded. Having too much much strain his professional career as a tennis player.

He has been ranked among the top 3 best tennis players in the world so you know for a fact that his email listing is full come companies trying to reach out to the pro-tennis player.

Once again thanks for reading and reaching the end in our article Grigor Dimitrov Net worth, we do hope you have enjoyed reading and that you have learned some things along the way about your favorite tennis player.

Please remember to check out a few of the other related articles that we have on her here like, Kei Nishikori’s net worth alongside a few of your other favorite tennis star’s net worths.