Take a look at some drills to improve footwork in tennis. Your footwork is an important component in making you a tennis star. So be sure to perfect it.

There are many sports thats literally depends quite a lot of footwork and it is safe to say that tennis is actually one of those sports. Most of the attention seems to lean towards the arms from a spectator’s perspective, but having a firm base is a key factor as well.

If you’re looking to improve your footwork by simply going through a few drills, the good news is that there are a few out there that you can try today to step your game up. It’s best to keep in mind that tennis is one of those sports that requires a lot of small steps moving forward and not a lot of people does that.

For this you will need a ladder in order to get the job done. By using an agility ladder, you will be able to work on the footwork without needing to pick up any racquet. Tennis players aren’t the only ones that use agility ladder, there are many other athletes around the world who are looking to increase their foot speed as well.

Although it’s not a very big deal since it is just a standard agility ladder, there are many different drills a person will be able to work on to get their footwork in the right shape. Some of the top drills with an agility ladder include:

Even though these ladder are known to be on the smaller side, they are still effective for people who wants to improve on making those small steps in tennis. There are lots of player who doesn’t want to move much and those who want to take large steps so that they can go anywhere they want to on the tennis court.

As you can see, the agility ladder mostly focuses on speed, which means that it is about getting through every exercise and working on how fast you can move.

A lot of people see the spider run as a very effective way to not only improve their footwork, but to provide a challenge so that they can get better and better as they do it. Players will be able to see improvement in their footwork and speed just by doing this drill on a regular basis.

All you need for this is 5 tennis balls and the setup is relatively easy, as a ball is placed in five different areas on the court. You should place the balls on each corner where the baseline and sideline meet and the other balls should go on each side where the sideline and service line meet. The final ball should be placed in the center T.

Now all you have to do is start behind the center of the baseline and work your way up in a counterclockwise position to pick up all five balls. Once you have picked up, it’s now time to run from sideline to sideline to finish the drill. You can let your friends time this if you want, we think working with a second person would make the process a lot easier.

A good time is very doable, but it all depends on the person’s skill level. Wr highly recommend that you keep doing it a few times initially to get a good idea on the current time. Then after doing it on a regular basis you will know if any improvement has been made. The main focus is to get your time to a very low number, which will eventually prove that you’re doing a good job.

There is a unlimited amount of footwork drills you can use a cone to do on the court. With that said, there are lots of people who use multiple cone to set up ways to work on their footwork.

One of the most common type of cone drill is to have one at the center of the baseline. What you’ll do is start by hitting the ball on either forehand side or backhand side. After hitting the balls, you can expect them to move around the cone and return to the same side, moving in a circular rotation.

This helps quite a lot with footwork and balance, not only that but it works great in terms of keeping the feet moving after taking each shot. There are many people who are just starting out in the sport that will hit a shot and then not move around at all until the next shot. That is surely not a habit that you should practice when playing, as it will make you have a very lazy footwork.

4. Touching The Net After Shot

In order to work on your forward and backward movement, one drill that a lot of people practice has to do with touching the net after each shot. This will allow the player to move at a very fast pace, not to level that make the player completely exhausted. Moving back and forth to tap the net before hitting the next shot will allow you to move your feet efficiently.

This drill works wonders for players who are reluctant to move up towards the net on certain balls. Once you break your body into the habit of moving up, and then going back to rest or hit an overhead, it will definitely work in your favor and help to take your tennis gameplay to the next level.

One of the best way for players to have success on the court as a tennis player is to master the split step. There are various ways to get to a ball once it is hit, but knowing exactly where to go on the court is very essential.

The main focus on split step drills is to get the ball in your posession as soon as a person lands from this quick jump. You should properly time the split step jump right as the person is landing to right when the ball is struck. There are many people who are satisfied with just doing this training without actually hitting the ball, while there are others who prefer to incorporate it on the ball machine or with a friend.

You should take the time out to practice and then see what feels the most comfortable for you in the end. I can guarantee that most people will see their footwork improve over a period of time as the split step puts people on their toe.

For this you don’t need any equipment. Short sprints is super effective when it comes to helping with footwork in tennis when practice as a way of training. When on the tennis court, the players tends to move back and forth quite often, so this is why short spin helps to get players moving at a fast speed right away.

These sprints should be around 25 to 30 feet at most. Your main focus should be on fast explosion out of a neutral position, running towards the finish line in most cases. This drill will allow most people to sprint while also focusing on stopping same as you would in tennis.

Also, there are different types of direction changes that you can do such as crossover steps, shuffling side to side and many more. Your main target is to improve your start time and get used to those small burst of speed. The first step is very important. 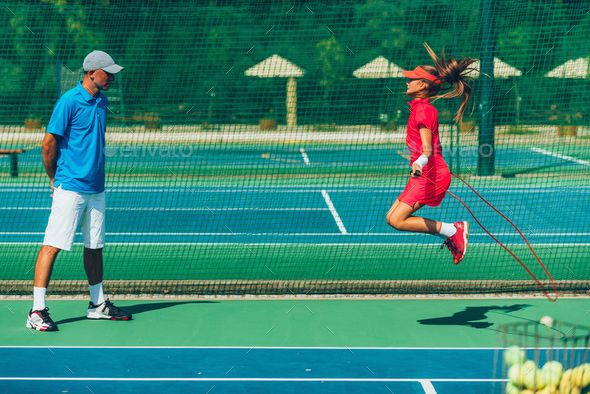 Another basic training you can do that may seems surprising is jump rope, though it may not seem like a big deal it can definitely help in a specific way. Not only is it effective when it comes to making short jump off the ground and general coordination, it helps a lot in building up stamina since it is such a superb exercise.

Jumping rope is something that you may see tennis star Novak Djokovic doing regularly. Not only does he do it to warm up, but also to improve his overall footwork on the court.

We think it is a great method to incorporate in your daily workout and if not you can do it as a warm up before a match. It’s a relatively easy way to train since it helps to keep the feet moving at a very fast pace. Having a slow feet in tennis will prevent the player from having a lot of success on the court.

Why are footwork drills so important?

When it comes to the game of tennis, most aspiring players spend a lot of time perfecting their techniques and groundstrokes but the footwork is most often neglected for some reason. Most people do not realise that the technique will not matter if you are not in the right position to begin with. Footwork is also the one component that can transform your game to new heights without you having to pick up a racket or learn a bunch of new shots and better still, it is something that every player can work on regardless of age and ability.

How Does Footwork Practice Help With Tennis

One of the main questions asked is why is it important to work on these footwork drills? We strongly believe that a tennis player that has a fast foot speed will have the option to hit more shots, having lesser errors, more control on the court and increased energy.

Most drills are very easy to learn and practice on a regular basis, so it is just a matter of doing them and you will certainly improve as time goes by.

Footwork is overlooked by a lot of people who don’t know much about the sport, but professionals work on it quite often to make sure they get in the best shape possibly so they have a better chance of winning the game.

Tennis footwork drills are essential for all levels of tennis players, right from beginners to advanced players. there are a lot of different ways to improve your footwork in tennis and we have just listed out a few above that we think are the best to help you with your game. we firmly believe that footwork is an integral part of tennis training but it is known to often be neglected so do try out these drills that are sure to upgrade your game and impress.